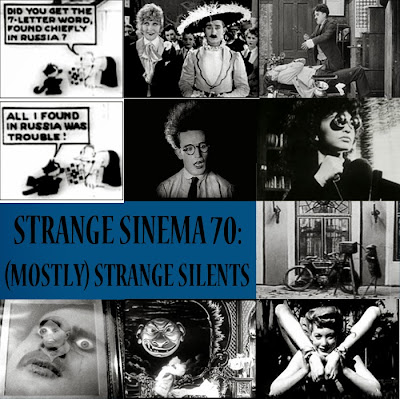 Oddball Films presents Strange Sinema, a monthly screening of new finds, old gems and offbeat oddities from Oddball Films’ collection of over 50,000 film prints. This installment of Strange Sinema 71: (Mostly) Strange Silents is a mesmerizing mélange of silent cinema strangeness featuring the earliest stag film ever made On the Beach aka Getting His Goat (1923); Polish director Ladislas Starévich’s Revenge of the Cameraman (1912), a brilliant stop motion animated film with a cast of insects; Laurel and Hardy’s side-splitting Big Business (1929) featuring the twosome traveling door to door selling Christmas trees and wreaking havoc; The Mouse Activated Candle Lighter (1974) showcasing a very quirky Rube Goldberg device; Laughing Gas (1914) starring Charlie Chaplin as a “accidental” dentist pumping patients full of laughing gas, knocking them out with clubs, and pulling the wrong tooth out of an unfortunate patient, Free Fall (1964), Arthur Lipsett’s brilliant, pixillating percussive montage; Dream Flowers (1930s) takes a historical look at opium poppy cultivation; Haunted Spooks (1920) starring the silent great Harold Lloyd as a brokenhearted gent seeking to commit suicide until he stumbles upon an equally desperate woman; Sun Healing: The Ultra Violet Way With Life Lite (1940s), promotes a quack medical device as a cure for skin disease; Meshes in the Afternoon (1943), one of the most important experimental films of the 20th century and Maya Deren's classic feminist exploration into the interior images of a woman whose daydreams restore mystery and danger to the ordinary objects of her everyday life; Camera Magic (1943), brings us the legendary Arthur Felig’s (Wegee) sensational camera tricks; and What is the World Coming To? (1926) predicting life in the future as we watch gender-bending screwballs get married. Plus! Felix the Cat in Russia (1924) and Excerpts from Baron Munchausen’s Hallucinations (1911) featuring Georges Méliès surreal cinematography! 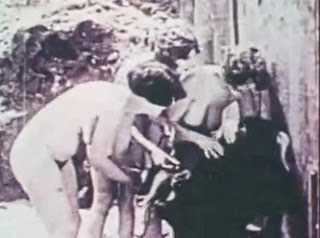 
“Idylwild Beach where the men are idle and the women are wild”
Here’s  one of the earliest stag films ever made starring Creighton Hale (from D.W. Griffith’s “Way Down East”). This feminist tinged stag from features 3 girls, a guy and a goat(!). Hale peeps through a knot hole on a group of girls and gets much, much more than he bargained for.

Revenge of the Kinematograph Cameraman (The Cameraman’s Revenge) (1912, B+W, hand tinted)
Wildly inventive landmark of early cinema and stop motion animation, insects star in this Kafkaesque love triangle.  Polish director Ladislas Starévich, working in Russia, started out as an entomologist when he tried to replicate a bug battle he had witnessed. His experiment was so successful and satisfying that he continued with animation. 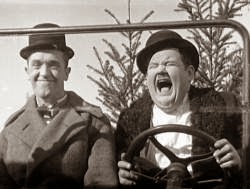 Big Business (1929, B+W)
A classic side-splitter featuring the comic genius of Laurel and Hardy. The boys go door to door selling Christmas trees and When a simple misunderstanding with a grumpy homeowner (the great James Finlayson) escalates from petty vandalism into full scale mutual destruction all havoc breaks loose in one of their most famous comic routines of all time! 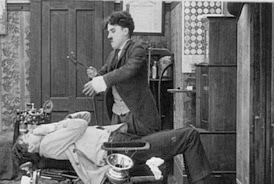 Laughing Gas (B+W, 1914)
Pretending to be a dentist Charlie Chaplin wreaks havoc on his “patients”, pumping them full of laughing gas, knocking them out with clubs, pulling the skirt off the dentists’ wife and pulling the wrong tooth out of an unfortunate patient. Watch this laugh riot from the master of silent silliness.

Free Fall (1964, B+W)
Free Fall features dazzling pixilation, in-camera superimpositions, percussive tribal music, syncopated rhythms and ironic juxtapositions. Using a brisk “single-framing” technique, the brilliant filmmaker Arthur Lipsett attempts to create a synesthesic experience through the intensification of image and sound. Citing the film theorist Sigfreud Kracauer, Lipsett writes, “Throughout this psychophysical reality, inner and outer events intermingle and fuse with each other – 'I cannot tell whether I am seeing or hearing – I feel taste, and smell sound – it's all one – I myself am the tone.'” Note: Free Fall was intended as a collaboration with the American composer John Cage, modeled on his system of chance operations. However, Cage subsequently withdrew his participation fearing Lipsett would attempt to control and thereby undermine the aleatory organization of audio and visuals.

Dream Flowers (1930s, B+W)
A fascinating silent film about the cultivation and use of the opium poppy.

Haunted Spooks (B+W, 1920)
Haunted Spooks is perhaps best known as the film that almost cost daredevil silent-film comedy legend Harold Lloyd his life -- a not-so-proppish bomb exploded in his hand, costing him a couple of fingers -- but it's also one of the American films to feature the African American as "spook" stereotype. Lloyd stars as "The Boy", a brokenhearted gent seeking to commit suicide when he stumbles upon an equally desperate woman, "The Girl" (Lloyd's real-life soon-to-be-wife Mildred Davis). Harold flops at suicide, but braves the haunted house!

Sun Healing: The Ultra Violet Way With Life Lite (1940s, B+W)
This curious cinematic sales anomaly showcases the phony ultra violet lite that supposedly cures everything from Impetigo to Psoriasas all with the flash of an iron shaped device. 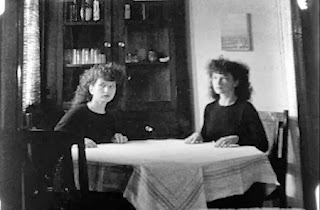 One of the most important and influential experimental films of the 20th century, Maya Deren's 18-minute feminist classic explores the interior images of a woman (played by Deren) whose daydreams restore mystery and danger to the ordinary objects of her everyday life. Deren veers away from plot to advance her view that a film should be like a poem: a deep tissue of images designed to examine a mood or startle us with the strangeness of the things around us. Using film as an artistic medium rather than as a vehicle for stars or story or action, Deren looks back toward the earlier European avant-garde of such filmmakers as Germaine Dulac, who believed that film most resembled the abstract yet emotional form of music. Deren's investigation of one woman's subconscious experience explicitly rejects the linear form of theater and literature in favor of the non-narrative models offered by painting, music, sculpture, or poetry. This alternative view of film as a non-narrative art form was incalculably influential on future filmmakers, and in 1990 Meshes was named to the Library of Congress's National Film Registry. ~ Leo Charney, Rovi 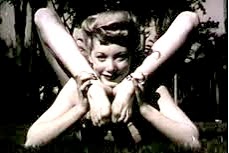 What's the World Coming To? (1926, B+W) Watch these gender-bending screwballs in this rare slapstick short by Hal Roach. In the future deliveries are made by blimp while men dress like women and women like men. Watch them marry in this gender bending screwball short!
Print courtesy of the Jenni Olson Queer Film Archive.

Felix the Cat in All Puzzled (B+W, 1924)
Felix tries to solve a crossword puzzle for his owner. His only clue is a word found in Russia. He steps outside in house and is kicked in the ass by a donkey all the way to Russia. In Russia he’s accused of being a spy. He’s then chased by a Russian and finds documented plans for a Russian revolt. Russians throw bombs at him, his tail falls off and he is then catapulted home by the force of an exploding bomb. Phew! 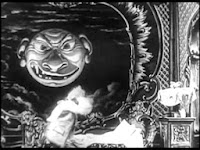 Excerpts from Baron Munchausen’s Hallucinations (1911, B+W)
Georges Méliès was the magician par excellence of the early cinema, innovating constantly to bring cinema to its full expressive potential. In his rarely-seen version of Baron Munchausen, Méliès takes on the fantasies of the great traveling Baron, using new camera tricks and exquisite sets to bring the stories to life.