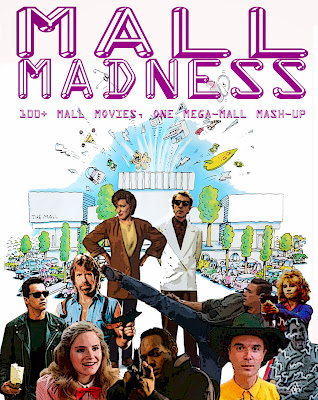 Oddball Films is excited to premiere Mall Madness, a feature-length video mash-up of over 100 movie mall scenes.  Just when you thought you wouldn't have to see the inside of a mall for months, Company Incorporated brings you an edge-of-your-seat thrill ride full of sex, romance, escalators, shoot-outs, car chases, killer robots, zombies, explosions and (of course) shopping all set in a celluloid mall!  Featuring an All-Star cast, including 4 different Arnold Schwarzeneggers and Nicolas Cages, Meryl Streep, Jennifer Lopez, 2 Lindsay Lohans, Chuck Norris, Steven Seagal, Jackie Chan, Hulk Hogan, Jennifer Jason Leigh, Steve Carell, Ryan Gosling, Michael Cera, 3 Kelli Maroneys, 2 Kristy Swansons and too many more to mention!  The film begins innocently enough; just kids hanging out and having a great time, but after some shopping, dancing and stopping in at the food court to gab about their love lives, the tone begins to change...for the worse.  Suddenly, every woman in the mall is being watched and followed. Then, watch out as a flurry of cars crash through the mall with The Blues Brothers and Jason Statham at the steering wheel.  But that's nothing in comparison to the shoot out of all shoot outs, with bullets flying from everywhere, leading up to a Hellevator sequence to make you lose your head before a gloriously bloody orgy of killings, all culminating in over one dozen mall explosions!  Leave the kids at home and hold onto your seats, because a trip to the mall has never been more exciting than this!