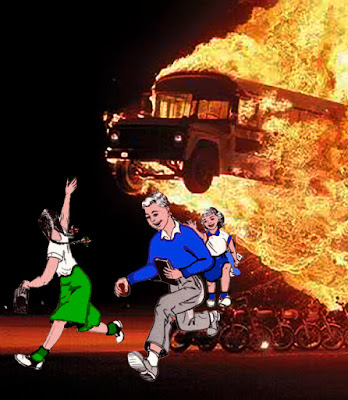 Oddball Films presents Learn your Lesson on the School Bus: An Accidental Shockucation, the 31st in a monthly series of programs highlighting the most ridiculous, insane and camptastic educational scare films, mental hygiene primers and TV specials of the collection. This month, in honor of Halloween, we're bringing you the gruesome, horrifying and deadly history of the school bus safety film with everything from hand puppets, felt punching bags with faces, ghost romances and little goody-goodies to round out the utter carnage!  From Gene Starbecker - the "father of the school bus safety film" - come two of the bloodiest scare films of all time: And Then It Happened (1972) and Death Zones (1975). These over-the-top nightmares feature the rowdiest kids you've ever seen - wielding knives, smoking, popping pills - the most patient of bus drivers and bodies galore! Busses end up in lakes and upside-down, they run over countless children, and leave a body count higher than most horror films! On the lighter side of bus safety, audience favorite Bobbie the plucky Bus Nut (1980) is back spreading her good bus vibes in her favorite yellow "bus nut" T-shirt!  Watch out for the schmoadles, punching bag shaped blobs that terrorize the bus driver with their terrible hallucinatory behavior in School Bus Safety: A Schmoadle Nightmare (1975). Get ghostly with bus safety when a new boy befriends a girl on the bus only to realize his new crush is a Ghost Rider (1982).  With bonus bus safety cartoons, hand puppets and more surprises in store, it's a great night to buckle up and learn your lesson! 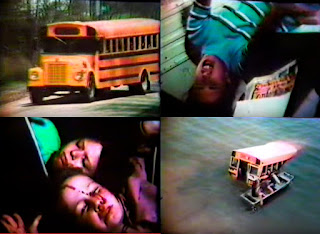 And Then It Happened (Color, 1972)
Produced and directed by Gene Starbecker, the “father of the school bus safety film” this classic cult film features lots of noisy, wisecracking kids and a catastrophe that has permanently scarred (!) anyone who has seen it in school over 30 years ago. Starbecker produced over 970 documentaries and 300 television programs (including the gritty Broderick Crawford cop show “Highway Patrol”).  The story concerns two horrific bus accidents and the rowdy behavior of the kids aboard that led to the deadly outcomes.  There are knife-fights and dogs, smoking, pill-popping and even mice on the loose!  The bus drivers are played by veteran actors Josh Mostel (son of Zero Mostel) and Peggy Pope (9 to 5), still early in their careers. 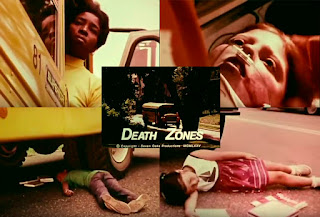 Whatever you do, stay OUT of the death zones!  A horrifying scare film that centers on three separate stories of unfortunate children that walked into a bus driver's blind spot and never walked out!  Our first tale is for the little ones, a story of a little kindergartener so excited to give her mother a valentine that she was willing to trade her life for it.  Then, we move onto the problem kids: the junior high schoolers who summarily sacrifice one of their own, under the wheel of the bus.  And finally the senior high schoolers, who ought to be savvier than their younger counterparts, but on a snowy day, all bets are off!

Bus Nut (Color, 1980)
Bobbie’s not like the other kids on her morning school bus. For them it’s just a ride, for her it’s the first step on the path of a life devoted to transportation safety. It’s okay with her parents and pleases professional bus driver Mrs. Harrison, too. This study of youthful obsession is not just a clever guise for a school safety primer, it’s a reminder that some fixations start very early. Co-starring the color yellow.

The next time Kevin sees Tracy on the bus, she gives him a bus safety manual and begs him to read it. The other kids wonder who he’s talking to. Then Kevin finds out that Tracy is a ghost. She died in a bus accident, and what’s more, she used to live in the same house as Kevin…
Trivia: Actor Doug Edmunds went on to co-found the 90s powerpop band the Gladhands.

School Bus Safety: A Schmoadle Nightmare (Color, 1975)
Reason number 27 not to take acid when you drive a school bus: you’ll be beset by huge, inflated, paramecium-shaped truants who want to make your life a living hell! See a school bus driver fend off a gaggle of Schmoadles, badly behaved little bastards who don’t know how sit still and can’t ride a bus without getting the cops involved. No one else can see them, but the bus driver knows they’re still there… Another bonkers production from Crocus Films and Art Pierson! 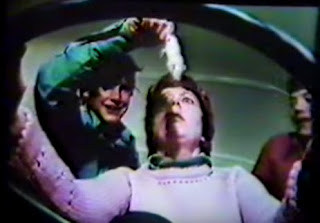