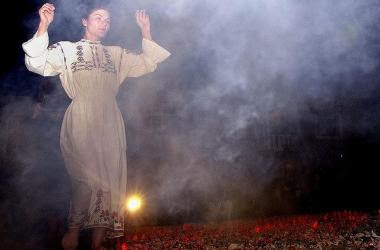 Oddball Films presents Strange Sinema 93, a monthly screening of new finds, old gems and offbeat oddities from Oddball Films’ vast collection of 16mm film prints. Drawing on his collection of over 50,000 16mm film prints, Oddball Films director Stephen Parr has compiled his 93rd program of classic, strange, offbeat and unusual films. This installment, Strange Sinema 93: Trance Cinema is an exploration into the cinematic documentation of ritual, trance and altered states. Drawing on rare ethnographic and historic acquisitions from the archives, this program showcases ritualized trance states, powerful healing ceremonies and ceremonial dances from around the world. Films include Margaret Mead and Gregory Bateson’s legendary ethnographic study Trance and Dance in Bali (1937-39), Anastenaria (1970), a rare documentation of surviving Dionastic worship in Greece featuring ritualized slaughter and a breathtaking fire walking ritual, Ma’Bugi: Trance of the Toraja (1973) the powerful physicality of spirit-possession rituals of the Indonesian highlands, where men climb a ladder of knives, Pomo Shaman (1964), a rare record of a female Pomo Indian doctor who enters a trance and cures a patient with the aid of a spiritual instrument, Walbiri Fire Ceremony (1977) showcases a spectacular three-day Australian Aboriginal communal ritual of penance, Himalayan Shaman of Northern Nepal (1966) John and Patricia Hitchcock’s examination of shamanism in the Himalayas including possession and purification, and Tanka (1976) David Lebrun’s remarkable and fierce animated vision of ancient gods and demons in the Tibetan Book of the Dead.  Also, pre-show highlights from Land-Divers of Melanesia (1972), Kal Muller and famed ethnographic filmmaker Robert Gardner’s profile of Melanesian men as they attach vines to their ankles, diving headlong from a 100 ft wooden tower in the Naghol land-diving ritual.

Trance and Dance in Bali (1937-39)
This ground-breaking film was produced by Gregory Bateson and Margaret Mead and records a performance of the Balinese ceremonial kris (dagger) dance-drama, which depicts the never-ending struggle between witch (death-dealing) and dragon (life-protecting), as it was given in the village of Pagoetan in the late 1930s. The dancers experience violent trance seizures, turn their krises against their breasts without injury, and are restored to consciousness with incense and holy water. Narrated by famed anthropologist Margaret Mead against a background of Balinese music. This “ecstatic ethnography” was an extraordinary effort to use film and photography in the field, and the precursor to much of the visual anthropology that has gone on since then.

Anastenaria (1970, B+W)
This very rare and poignant film documents the Anastenaria, a form of popular worship surviving from the days of ancient Greece but now disappearing. The ceremony includes the slaughter and communal eating of a special calf and a spectacular fire-walking ritual.

Ma’Bugi: Trance of the Toraja (Color, 1973)
This film depicts an unusual trance ritual that functions to restore the balance of well-being to an afflicted village community. The film communicates both the psychological abandon of the trance state and the often neglected motivation underlying activities such as the ascent of a ladder of knives and the supernatural curing of the chronically ill. Ma’Bugi clearly portrays the song, dance and pulsating tension that precede dramatic instances of spirit possession in the Toraja highlands Sulawesi (Celebes) Island, Indonesia.

Pomo Indian Shaman (B+W, 1964)
A Pomo Indian shaman participates in a healing ceremony during which she enters a trance and cures a patient with the aid of a spiritual instrument in the throat used to suck out illness.

This film documents the second and final night of a Kashaya Pomo healing ceremony lead by Essie Parrish (1903-1979), a spiritual, cultural and political head of the Kashaya Pomo community and one of the only southwestern Pomo sucking doctor who still practiced this ancient form of doctoring. Along with her good friend, Cache Creek Pomo medicine woman and fellow basket weaver Mabel McKay, Parrish would be the last of the sucking doctors in California—and probably the last in the entire country.

The ceremony took place June 1, 1963 in a ceremonial roundhouse of the Southwestern Pomo (now more commonly referred to as Kashaya or Kashaya Pomo) near Stewarts Point, California. During the ceremony (which is presented without narration), Parrish enters a trance and cures a patient with the aid of a spiritual instrument used to suck out the patient’s illness. Parrish only gave the film crew one chance to shoot the ceremony, with no equipment allowed inside the roundhouse where the ceremony took place. All cameras and lighting were setup to shoot through knot-holes in the walls, which explains the films dark, high contrast appearance.

William Heick’s POMO SHAMAN grants us a rare chance to experience a ceremony generally off-limits to cameras. According to Essie’s son, Parrish only agreed to be filmed knowing that their traditions were going to be preserved on film for both their community as well as the outside world. To this day, the Kashaya watch this film before performing healing ceremonies since the film, according to Essie’s son, is “infused with her healing powers. Music by Bernice Dollar, Bertha Antone, Julia Marrufo.

Walbiri Fire Ceremony (Color, 1977)
From the other side of the planet documents a spectacular three-day Australian Aboriginal communal ritual of penance. The ceremony culminates in a nighttime ordeal in which the owners are humiliated, engage in self-flagellation with burning bundles of twigs and are showered with sparks from burning branches. This is a powerful, engaging and fascinating film.

Himalayan Shaman of Northern Nepal (Color, 1966)
Produced by famed ethnographic filmmakers John and Patricia Hitchcock with the support of grants from the National Science Foundation this film examines the practice of shamanism in Northern Nepal. Shot in the Himalayan valley near the Dhaulagiri massif the film focuses on the work of a shaman, his costume and procedures including possession, sucking out evil spirits from his clients, contact with the "other world" and purifying his mouth with fire.

Tanka means, literally, a thing rolled up. David LeBrun’s Tanka is brilliantly powered by the insight that Tibetan religious paintings are intended to be perceived in constant movement rather than repose. The film, photographed from Tibetan scroll paintings of the sixteenth to nineteenth centuries, is a cyclical vision of ancient gods and demons, wild revels, raging fires and sea battles with monsters-an animated journey through the image world of the “Tibetan Book of the Dead”.  With an  original score by Ashish Khan (sarod), Buddy Arnold (saxophone, clarinet, flute), Pranesh Khan (tablas) and Francisco Lupica (percussion).

Land-Divers of Melanesia (1972, Color)
To ensure a good yam crop, men of Pentecost Island in Melanesia attach vines to their ankles and dive headlong from a wooden tower over 100 feet tall, a ritual referred to as Naghol or land-diving. Those who dive say the fall clears their mind. The vines are relatively elastic and the ground is softened so injury is rare. For Pentecost Islanders the annual dive takes an appropriate place among other rituals and ceremonies such as blessing the taro crop, circumcising young boys and feasting with relatives, all of which keep them in touch with the forces that control the world in which they live. This film was directed by Kal Muller in collaboration with renown ethnographic filmmaker Robert Gardner (Forest of Bliss, Rivers of Sand) for The Film Study Center at Harvard University. 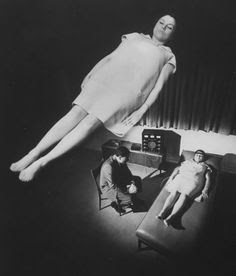