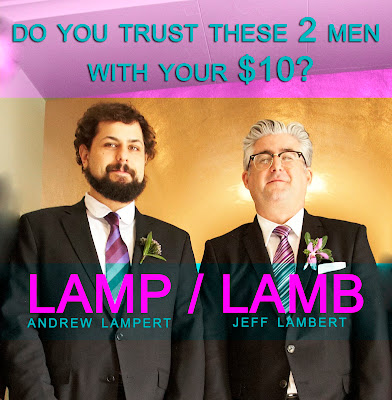 Oddball Films is proud to present a film programming throwdown between New York’s Andrew Lampert of Anthology Film Archives and home towner, the National Film Preservation Foundation’s Jeff Lambert. Putting their decades of film preservation experience to use, these two cinema savants will raid the Oddball stacks to do battle in a blind curatorial showdown.
With the cinematic theme still to be determined, even Lambert and Lampert have very little idea what to expect.  Each of these celluloid gladiators will step into Oddball Stadium with the same specific programming theme and a pre-determined running time to fill with filmic oddities and movie mayhem.

The theme on which this battle will be based will soon be released on the Oddball Films Blog, Twitter feed and Facebook Page.  Keep watch, film lovers.


A fierce competitor, Lampert brings years of blind curating experience having turned the Unnessential Cinema series of neglected reels into a cultural phenomenon. Recently the Wall Street Journal (!) ran a story on the Anthology Film Archives “Single Frame” show where a group gathered to watch random slides provided by the audience. Slides! They don’t even move! He is that good.


Lambert has less experience in the programming arena, and we are as shocked as you that he is abandoning his stool at the Latin American Club to do something here. Lambert assures us we can expect the expected: “I’m not here to make friends. I plan to bring the celluloidal cray cray to the screen.”

Born in the mid-70s in the Midwest, Andrew Lampert primarily produces films, videos and live performances. Over the last decade his works have been widely exhibited at festivals (NY Film Festival, Rotterdam International Film Festival, Kill Your Timid Notion), in cinemas (BFI, Light Industry), in galleries (Mitchell Algus Gallery, NYC & Associates, London), performance venues (The Kitchen, NYC & The Center for Contemporary Art, Glasgow), museums (The Getty Museum, Los Angeles & The Whitney Museum of American Art) and elsewhere. Lampert  lives in Brooklyn, works as Archivist at Anthology Film Archives and is researching the seamy underbelly of the music industry for a theatrical production.

Jeff Lambert is the Assistant Director of the National Film Preservation Foundation, where he produced the award winning DVD set Treasures IV: American Avant-Garde, 1947-1986. Based in San Francisco, Lambert has taught at San Francisco State University. His writing on film has appeared in The Nashville Scene, Res Magazine, and Senses of Cinema.  He is currently curating the NFPF’s forthcoming DVD set, Treasures 6: Next Wave Avant-Garde (due for release in 2013). His true dream is to become Andrew’s West coast Alan Licht.