Oddball Films presents Treasures From TV Land. Whether it was a commercial or a sitcom, commercials or a variety show, most television production prior to the late 1970s was made on 16mm. This program features rare, weird and wonderful vintage TV screened from 16mm film prints. Highlights include excerpts from The Debbie Reynolds Show featuring the multi-talented leading lady in the skit A Date With Debbie (1960); Season 3 episode 31 of My Favorite Martian titled My Nut Cup Runneth Over (1966) about a squirrel accidentally transformed into a human; Some Like It Hot (1961), the un-aired, lost TV pilot for a series based on the classic Billy Wilder film; and clips from the queen of TV comedy Lucille Ball's shows I Love Lucy and The Lucy Show. Plus! Television Land (1971) brilliantly edited visual history of the great communicator, and loads of kooky vintage TV commercials. 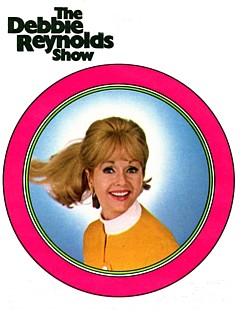 
In 1960, the multi-talented Debbie Reynolds signed a 3-year contract with ABC to produce a yearly TV special.  The debut features the brilliant Carl Reiner, a sensational performance of “This Here” by the Cannonball Adderley Quintet, and some fine singing, dancing and formidable comedy from Ms. Reynolds.

Some Like It Hot (b+w, 1961)
Super rare TV pilot (un-sold and un-aired) attempted to franchise the all time classic Billy Wilder film as a weekly program.  Jack Lemmon and Tony Curtis appear at the opening before undergoing plastic surgery (the mob is still after them), re-emerging as “look-alikes” Vic Damone and Dick Patterson.  For some reason, they continue to dress in drag and play with the all-girl band… Tina Louise (of Gilligan’s Isle fame) replaces Marylin Monroe and a bit part by George “I wish my brother George was here” Liberace.
Email ThisBlogThis!Share to TwitterShare to FacebookShare to Pinterest
Newer Post Older Post Home