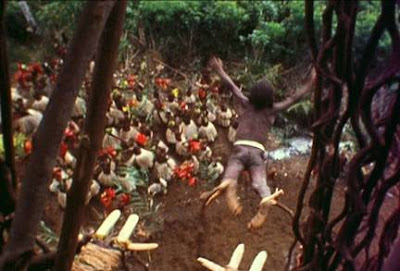 Oddball Films and Curator Stephen Parr present Strange Sinema 52, a monthly screening of offbeat films, old gems and newly discovered oddities all culled from Oddball Films 50,000 film archive. Entertaining, experimental and eye-opening,  tonight’s films feature: Land-Divers of Melanesia (1972), Kal Muller and ethnographic famed filmmaker Robert Gardner’s collaborate to profile Melanesian men as they attach vines to their ankles, diving headlong from a 100 ft wooden tower in the Naghol land-diving ritual; Isaac Hayes performs the Theme From Shaft in this eye-popping, over-the-top display of glitz from the 44th Academy Awards show in 1972; Lipstick and Dynamite features furious femmes battling it out for the Women’s Wrestling Championship of the World in 1949; and the famed Tiffany Chimps star in My Children (1931!), an all-monkey "chimpsploitation" comedy short. Three brilliant, hilarious, stop-motion, live-action films by film pioneers David “Chuck” Menville and Len Janson including Stop, Look and Listen about “human-powered” automobiles, Blaze Glory, the 70’s midnight movie hit spoof of Western gunfighters and Vicious Cycles another wacko short about biker gangs terrorizing scooter clubs. Two of film genius Georges Melies’ most remembered surrealist films The Ballet Master’s Dream (1903) and Fairy Land: A Kingdom of Fairies (1903); and 7362 (1967) the languid rhythms of fades, dissolves and superimpositions permeate this masterfully avant garde film by the auteur of the optical printer Pat O’Neill. Plus: Bizarre home movies from 1958, jet crash, Needle in a Haystack contest, guy jumps into a pool of fire, and Jayne Mansfield in a rickshaw?


Land-Divers of Melanesia (1972, Color)
To ensure a good yam crop, men of Pentecost Island in Melanesia attach vines to their ankles and dive headlong from a wooden tower over 100 feet tall, a ritual referred to as Naghol or land-diving. Those who dive say the fall clears their mind. The vines are relatively elastic and the ground is softened so injury is rare. For Pentecost Islanders the annual dive takes an appropriate place among other rituals and ceremonies such as blessing the taro crop, circumcising young boys and feasting with relatives, all of which keep them in touch with the forces that control the world in which they live. This film was directed by Kal Muller in collaboration with renown ethnographic filmmaker Robert Gardner (Forest of Bliss, Rivers of Sand) for The Film Study Center at Harvard University. 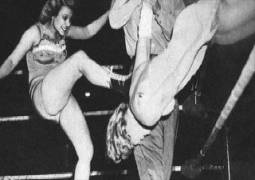 Isaac Hayes-Theme From Shaft  (1972, Color)
Isaac Hayes performs the Theme From Shaft in this eye-popping, spectacularly (!) staged performance from the 44th Academy Awards show in 1972. Hayes was the first African-American to win an Oscar in a music category.

My Children (1931, B+W)
Featuring the world famous Tiffany Chimps in an early “chimpsploitation” comedy short. An all-monkey, all talking picture! 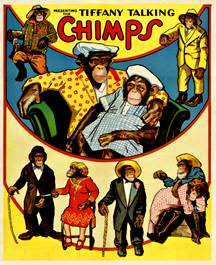 Their first collaboration, Stop, Look and Listen (1967), was nominated for an Academy Award. In this short film the main characters “drive” down city streets in invisible cars. It’s
ostensibly a public safety film that informs the audience of the merits of following the rules of the road. Wildly inventive use of stop motion techniques-- use of human body as vehicles(!) make this eye-popping short a sensation.

Also screening is Blaze Glory, a spoof of Westerns. This time our heroes and villains ride around, without horses in sped up style. The film was a hit short at Midnight Movie screenings in the early 70s.

The Surrealism of  Georges Melies - The Ballet Master’s Dream (1903) & Fairy Land: A Kingdom of Fairies (1903)
Remembered best today as the master of surreal and fantastic films Georges Melies (lionized in Scorcese’s “Hugo”) was the first true artist of the cinema.  Developing an extensive repertoire of camera tricks, Melies created miraculous appearances, disappearances and transformations--astounding audiences with extraordinary effects never before witnessed on the screen. Relying mainly upon photographic illusion to tell his story, The Ballet Master's Dream (1903) hints at the rich imagery which Melies was capable of suggesting and is a fitting prelude to his piece de resistance of the same year, The Fairy Land or The Kingdom of the Fairies which stands out as one of Melies' most masterful productions. 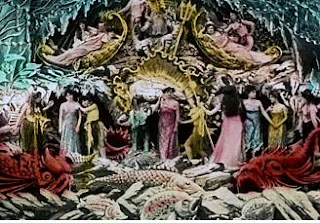 7362 (1967)
The languid rhythms of fades, dissolves and superimpositions permeate this masterfully dense film by famed avant garde filmmaker and auteur of the optical printer Pat O’Neill. This film preserved by the National Film Preservation Foundation and included in their dvd box set Treasures of the American Avant-Garde Film, 1947-1986.
“This film started out to be about the motion and sound of the oil derricks that once lined the beach in Venice, California. The derricks, which had been built during the oil boom of the 1920's, were made of wood and rusted iron, and were largely open and unattended. I was attracted to these towers by their moaning sounds, their heady aromas, and the consolation of the endless rising and falling of the pump heads. Somehow it seemed like prayer. The film came to contain a human body, and then moving objects, which I filmed in my studio: rotating and oscillating shapes whose outlines would merge with one another. But in a way the piece was really about re- photography - about making something out of ordinary parts using mechanical technology to reveal a glimpse of something uncanny.

Bizarre Home Movies From 1958 (Color and B+W) Featuring a jet crash in Cupertino, a Needle in a Haystack contest, a guy jumping into a pool of fire and Jayne Mansfield (?) in a rickshaw!