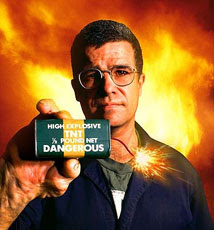 Oddball Films has the rare opportunity to present the fourth annual installment in the innovative interview-based series MESS (Media Ecology Soul Salon) featuring Mark Pauline founder of the Survival Research Laboratories. Los Angeles media artist and curator Gerry Fialka will interview Pauline in person on the Oddball Cine Stage, with video excerpts from 40 years of SRL performances.  Survival Research Laboratories, founded in 1978, is the innovator of robot-based performance art and known for the most dangerous shows on earth.  So dangerous, in fact, that recently the group was banned from performing in San Francisco.  This rare and exciting interview will explore the unique blending of performance and technology and the mind behind the robotic mayhem. 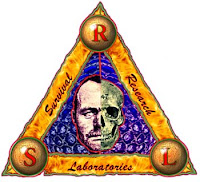 
Mark Pauline is an American performance artist and inventor, best known as founder and director of Survival Research Laboratories. He is a 1977 graduate of Eckerd College in St. Petersburg, Florida. Pauline founded SRL in 1978 and it is considered the premier practitioner of "industrial performing arts", and the forerunner of large scale machine performance. SRL is known for producing the most dangerous shows on earth. Although acknowledged as a major influence on popular competitions pitting remote-controlled robots and machines against each other, such as BattleBots and Robot Wars, Pauline shies away from rules-bound competition preferring a more anarchic approach. Machines are liberated and re-configured away from the functions they were originally meant to perform. 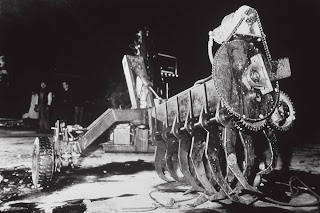 Pauline has written of SRL, "Since its inception SRL has operated as an organization of creative technicians dedicated to re-directing the techniques, tools, and tenets of industry, science, and the military away from their typical manifestations in practicality, product or warfare." Since its beginning through the end of 2006, SRL has conducted about 48 shows. In the summer of 1982, Pauline blew his hand off while experimenting with solid rocket fuel. In August 1990, ArtPark, a state-sponsored arts festival in Lewiston, New York, cancelled a Pauline performance when it turned out he intended "to cover a sputtering Rube Goldberg spaceship with numerous Bibles" that would "serve as thermal protective shields" and be burned to ashes in the course of the performance. According to Pauline "I like to make machines that can just do their own shows... machines that can do all that machines in the science fiction novels can do. I want to be there to make those dreams real."[3] Obtainium - The word obtainium likely originated from but was most certainly popularized by SRL crew finding or liberating discarded or obsolete items and re-directing them from industry, science, and the military and re-purposing them for anarchic machine performances. 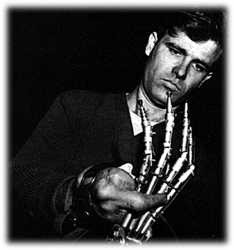 "Great interviewing requires a stimulating interviewer and Gerry Fialka is certainly that. Best part is that he makes the rare act of deep thinking in public before an audience flow as creatively and easily as a Basquiat painting." - Jay Levin, LA Weekly founder and former editor-in-chief

"My experience in Gerry Fialka's MESS series was a scintillating discussion of history, culture, philosophy, sociology and the creative process. His questions and ideas transcend the accepted, traditional limitations of 'the interview.' " - Brad Schreiber, author, producer, screenwriter, journalist 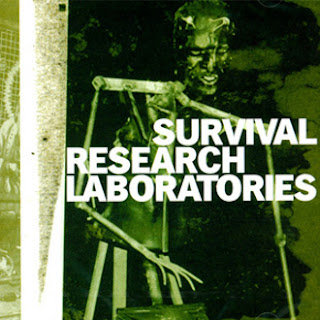 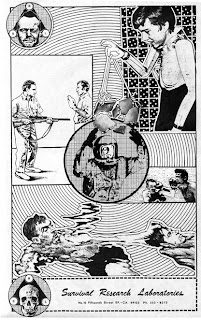 MESS (Media Ecology Soul Salon), produced by Gerry Fialka since 1997, is based on Marshall McLuhan's insight: "If you don't study the effects of technology, you become its slave." And by "technology" McLuhan was referring to anything humans invent, from language to computers, from philosophy to books, from toothpicks to bulldozers. In dialogues with modern thinkers, MESS provides a forum for probing both the form and the content of media, and for comprehensively surveying-its services and disservices, avoiding bias or point of view. MESS is percept-plunder for the recent future.

In his book "I, Fellini," Federico Fellini wrote, "I don't mind speaking autobiographically because I reveal less of myself talking about my real life than I do if I talk about the layer underneath, the one of my fantasies, dreams and imagination." MESS peers into the portals of discovering this layer. MESS seeks what lies beyond this layer.

Participants -- including writers, artists, filmmakers, musicians and activists -- are the early radar systems and rear-view mirrors detecting how major transformations in technology affect us. As we live in a MESS-age, this interactive series shakes people out of their regular agendas and reality tunnels. MESS promotes mapmakers who search for new lands and new data. MESS seeks meticulous understanding of every thing we see, hear , feel, taste, and smell, passionately needling the somnambulists and proving that learning can and must be fun. As McLuhan asked, "How are you to argue with people who insist on sticking their heads in the in visible teeth of technology, calling the whole thing freedom?" "Technologies are not mere exterior ads," said Walter Ong, "but also interior transformations of consciousness." And, in his book Immediatism, Hakim Bey observed, "Simply to meet face-to-face is already an action against the forces that oppress us by isolation, by loneliness, by the trance of media." "If it works, it's obsolete." -- McLuhan. "Another fine MESS." - Random Lengths News. 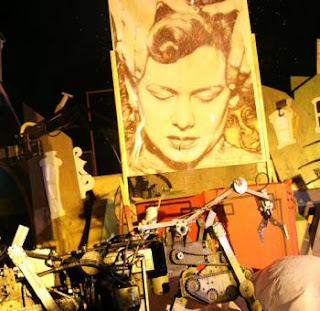 "Gerry Fialka's MESS series is a unique opportunity to meet special artists in a unique, intimate and revealing setting. His intelligence and dedication to research leads to a stimulating and highly interactive interview that is both entertaining and amazingly enlightening." - Phil Proctor of the "Firesign Theatre"

"Gerry Fialka is very special, well prepared and ready to take risks - I learned about my self! My kind of interviewer. " -Martin Perlich, author THE ART OF THE INTERVIEW

"Gerry Fialka is willing to enter in new discussions even if they go against his current views. Fialka's multilayered delivery of ideas encourages the search for new questions and new paradigms that extend beyond. He is well-informed, off-beat and articulate - one of the most fascinating people I've met." - Keith Jeffries, Ascalon Films
Email ThisBlogThis!Share to TwitterShare to FacebookShare to Pinterest
Newer Post Older Post Home