Winter of the Witch and Other Tales of Possession and Enchantment - Fri. Oct. 26 - 8PM 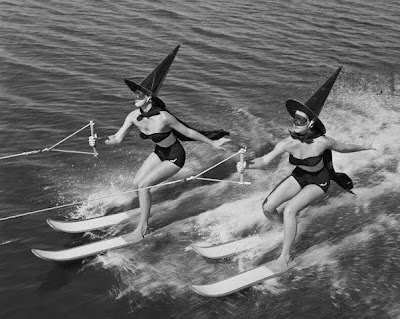 Oddball Films and guest curator Lynn Cursaro present Winter of the Witch and Other Tales of Possession and Enchantment featuring  a coven full of maternal, malevolent, saucy, sweet and hippie-dippie witches to ring in Halloween weekend.  The charming Winter of the Witch (1969) presents us with a mischievous old dear who is eager to share the delicious secret of happiness. Georges Méliès’s pioneering cinema of visual magic is the perfect vehicle for a pair of hellzapoppin’ otherworldly shenanigans: The Inn Where No Man Rests and The Witch’s Revenge, (both 1903). The Occult: X-Factor or Fraud (1973), examines the groovy Woodstock-era resurgence of the dark arts. Witchcraft’s time-tested power is pitted against Woody Woodpecker's madcap cartoon mojo in Witch Crafty (1955). And the devil gets his due in appropriately fleshy style in two sinful oddities: 1920s era stag marvel The Devil and Betty Dolan's endearingly strange mid-century burlesque in Satan-Tease. More is stewing in the Oddball cauldron, so hop on your broom and make sure to be there!  And as always, complimentary home-baked treats appropriate to the season for all.

Winter of the Witch (Color, 1969)
Ah the sweet magic of pancakes! A young mother and her son move from the big city and get a great deal on a huge house, only to find an ancient witch is part of the bargain. When their enchanted tenant finds they won’t be scared away, she lets them in on the secret of happiness - a griddle full of her special blueberry pancakes. The fabulous Hermoine Gingold gives a beautifully hag-positive portrayal. Narrated by Burgess Meredith.

The Occult: X-Factor or Fraud  (Color, 1973)
X-Factor or Fraud presents us with self-styled mystical types ranging from earnest believers to hucksters, served up with a generous sprinkling of cheese. It's hippie chic meets old-style hag-tastic, with the motley bunch weighing in all things otherworldly. This camp fest is graced by the grandeur of talk-show-hopping superstar sorceress, Sybil Leek.

The Inn Where No Man Rests (B+W, 1903)
Insane devilry with inanimate objects was Méliès' stock-in-trade, with this venture into motel hell being no exception. A weary traveler is tormented out of a peaceful night by his boots, the bed and just about any object in the room, but the ruckus really gets out of hand when the other(worldly) guests come to investigate.

The Witch's Revenge (B+W, 1903)
In trouble with the king for practicing the dark arts, a sorcerer tries to conjure his way out of trouble. His offer to enchant the woman of the ruler's dreams by way of wizardry goes absurdly awry.

Witch Crafty  (Color, 1955)
Woody Woodpecker's animated anarchy versus witchcraft, what a battle! When a passing witch-in-distress stiffs Woody for the price of a broomstick, our feathered friend employs a bag of cartoon world tricks a witch could never dream of in order to get the crone to cough up his dime.  Any guesses who wins?

The Devil  (B+W, circa 1920’s, silent, excerpt)
Silent smut from France! It's just another picnic dans le foret for a sextet of tender nymphs, scampering and splashing au naturel in a gentle stream. That's until les juenes filles are interrupted in their frolics by the theatrically turned out Horned One, who might just have escaped from a Méliès short. The usual stag film action ensues, but the vintage beauty of this sex film makes it a devilish winner.
Satan-Tease  (B+W, 1955)
Burlesque queen Betty Dolan brings new meaning to the phrase dancing with the devil. Cleverly costumed, Miss Dolan's right hand is the hand of the devil and she can't stop it from trying to get to third base. Strange and erotic on many different levels, it must be seen to be believed!

Hyde and Sneak (1970)
Inspector Willoughby finds himself up against jewel-thieving temptress Vampira Hyde, whose shape-shifting pills defeat all of his clever traps.
. . . and only the Devil knows what else!
About the Curator
Lynn Cursaro is a local film blogger. Over the past two decades, she has worked in research and administrative positions a variety of Bay Area film organizations. The monthly picture puzzle on the Castro Theatre’s calendar is of her devising.