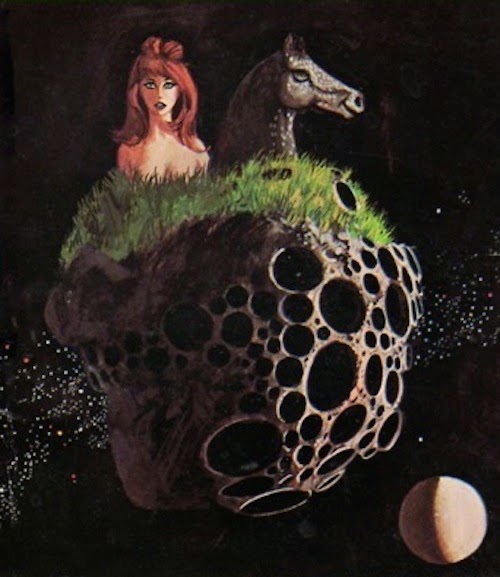 Oddball Films and curator Kat Shuchter present What the F(ilm)?! 5: Cine-insanity from the Archive an evening of some of the most bizarre, hilarious and insane films from our massive 16mm collection. In this edition, we've got clown-faced mental hygiene primers, talking horses, grandpas gone AWOL, a claymation tooth rock opera and doll parts flying everywhere! We've got the small screen oddity Mae West Meets Mister Ed (1964) in which Mae West, playing herself, asks Wilbur to come on up and redesign her stables sometime. In If Mirrors Could Speak (1976), a straight-talking looking glass gets real with a variety of young scofflaws shamed with clown-makeup. It might be in Spanish but you won't miss the meaning behind the hilarious cartoon Sex, Booze, Blues and those Pills You Use (1982).  Grandpa outfits his wheelchair with a lawnmower engine and takes off around the nursing home in The Wild Goose (1973). Jesus Christ Superstar meets the California Raisins in dental hygiene rock opera The Munchers (1973). A little girl's doll gets the crash-test dummy treatment in the ridiculous Safety Belt for Susie (1962). We go under the sea for a picnic and other strange underwater activities in Aqua Frolics (1950). With musical interludes from Les Hite and his Orchestra singing Pudgy Boy (1942) and from the Three Caballeros in Di$ney's dizzying blend of live-action and animation Blame it on the Samba (1948). It's a night of celluloid psychosis too bizarre to miss! 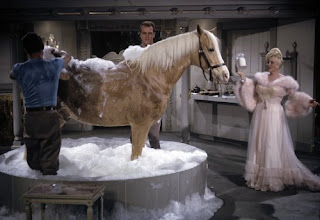 
Mae West Meets Mr. Ed (B+W, 1964)
The 1960s were a hard time for many of the great stars of the 1930s and 40s.  Joan Crawford made a turn towards schlocky horror, and Mae West headed for the horse stables of Television.  In this bizarre episode of the classic TV program, Mae West sweeps into town and requests that Wilbur redesign her horse stable, with all the luxury fit for a Hollywood Queen.  Ed overhears the conversation and begins to resent his own surroundings, shabby by comparison, but soon realizes pampering isn't what it's all cracked up to be. 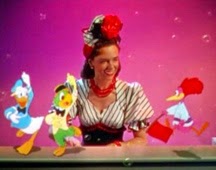 Sex, Booze and Those Pills You Use (Color, 1982)
A particularly unusual, and gut-splitting, animation about alcohol and sexual disfunction reminds the audience that one or two drinks might turn you into casanova, but too much many might leave your lover something to be desired.

Blame it on the Samba (Color, 1948) A unforgettable and mesmerizing Technicolor film mix of live action and animation featuring Ethel Smith, the Dinning Sisters and a dizzying array of animated characters. Produced by Walt D*sney

Pudgy Boy - Les Hite and His Orchestra (B+W, 1942)
A supersized swingin' soundie. Big Band leader Les Hite tackles the Battle of the Bulge when all the girls go for his hunky competition.

The Wild Goose (B+W, 1973, Dir. Bruce Cronin)
An endless round of octogenarian birthday parties, insipid poetry readings, boring meals and confrontations with no-nonsense nurses make the "wild goose" determined to escape from his nursing home, wreaking havoc in his motorized wheelchair in this hilarious fantasy filled with sight-gags and in which no dialogue is necessary. Winner of a Baltimore Film Festival award, 1975, and still used as a nursing home training film!!

Aqua Frolics (1950, B+W)
This wet and wild compilation is full of fun and strange water activities.  A newsreel style staging of clowning around in a world where most people need gills, these vignettes are silly and somewhat surreal.  All things once thought normal go berserk when you add a little agua.  This film is a fun respite from regular news footage and sends a great message about imagination and the joy of performance art.