Oddball Films and Emmy winning filmmaker Kate Schermerhorn present After Happily Ever After. Exploring questions about marriage in the 21st Century, Kate Schermerhorn's new documentary, asks why we marry, whether we should marry, and how some of us actually even make marriage work. Simon Winchester, New York Times best-selling author of “The Professor and the Madman” calls it: “Intelligent, sensitive, funny and tender.”  From a couple who dress alike every day, to a pair of nudists and a newlywed pair of mothers, to a feisty English widow, this 60 minute film features an eclectic mix of long married couples who reveal their secret to making their own unions succeed. Along the way, Schermerhorn chronicles the joys and heartbreaks of her own marriage, and finds that even the best advice can't always guarantee  a happily ever after. Plus, rare oddities about love and relationships culled from Oddball Films 50,000 reel archive including Dating Do's and Don'ts (1949) one of the campiest educational films ever made, this fantastically funny short gives you all the tips you need to nab "mr" or "miss right". The filmmaker will be in attendance to introduce and conduct a Q&A after the screening. 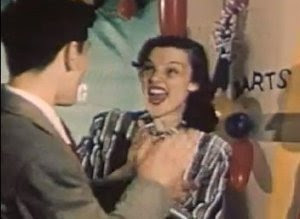 DVDs available for sale after the screening.
For more information about Kate Schermerhorn and After Happily Ever After visit the documentary's official website.
Here's a link to SFGate's recent piece about this film.
Email ThisBlogThis!Share to TwitterShare to FacebookShare to Pinterest
Newer Post Older Post Home