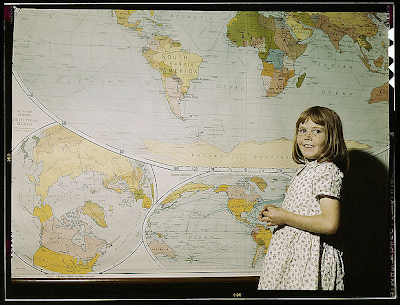 Oddball Films and guest curator Hannah Airriess present Ancient and Imagined Worlds. This program features films concerning worlds beyond what we occupy; worlds that have been lost to time and worlds that are products of fantastic imagination. The short documentary The Inner World of Jorge Luis Borges (1972) acts as a foundation for this program. Borges masterfully creates worlds and civilizations spanning all of history in his short stories and essays, and through interviews filmed in his native Buenos Aires he explains his relationship to mythology, time, and space. In a clip from The Lost World (1925), we see a prehistoric world that has continued to exist into the present, and the disaster that emerges when explorers try to make contact, illustrated in early stop motion animation. The animator Philip Stapp beautifully renders the ancient agricultural rituals of Mayan and Aztec cultures in First Americans: And their Gods (1969 - Part I), detailing pre-Columbian history with dizzying animation techniques and an experimental audio track. Moving into the imagined realm, Flatland (1965) takes place in a world that only has two dimensions and a strict social code; when a three dimensional sphere enters the picture, the laws of the universe begin to fall apart. Back on earth, Our World in Review: Arctic Exploration (1936) features explorers encountering new landscapes and frontiers, with the aid of a pack of snow dogs. Georges Méliès’s Dreams of Baron Munchausen (1911) concludes the show, showcasing the beautiful and frightening dream world of a man who had too much to drink. 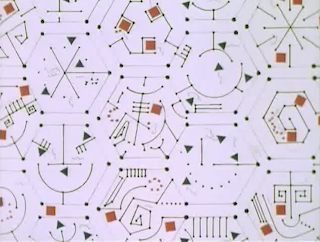 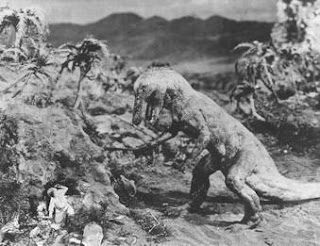 The Lost World (B&W, 1925)
In this scene from the film adaptation of Arthur Conan Doyle’s 1912 novel of the same name, a group of explorers discover a world where dinosaurs still roam the earth. As they attempt to make a home amongst the dinosaurs, they fall victim to attacks by dinosaurs, big cats, and ape-men. The Lost World contains a wide variety of visual tricks, most notably stop-motion animation, to create a dazzling prehistoric world hidden within our own.

First Americans (Part I): And their Gods (Color, 1969)
This educational short film tells the story of ancient agricultural rituals of the Aztec and Mayans through the breathtaking animation of Philip Stapp. He uses bold colors, jarring movement, and a variety of illustration styles ranging from pointillist to abstract in order to illustrate these elaborate cultural histories. Music by Thomas Wager and Arthur Burrows, referred to as “ethno- concrète,” accompany this gorgeous animated short. 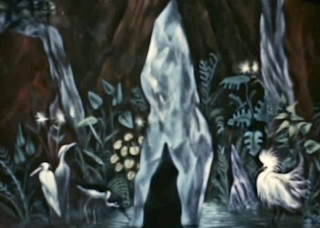 Flatland (Color, 1965)
This short film, adapted from Edwin Abbott’s 1884 novel of the same name, tells the story of a world that only exists in two dimensions. Told from the perspective of a square, the film provides a tour of 2D society, and the chaos that ensues when a three-dimensional sphere makes a visit. This visually stimulating, and at times psychedelic, short was made in the first years of the animation program at Harvard’s Visual Arts Center, and is narrated by Dudley Moore.

Our World in Review: Arctic Exploration (B&W, 1935)
New worlds continue to emerge on earth, as explorers move deeper into the sea, rainforests, and snowy terrains. This newsreel from the 1930s focuses on the importance of dogs in arctic exploration, as well as the fascination with new frontiers and attempts to conquer these emerging worlds. 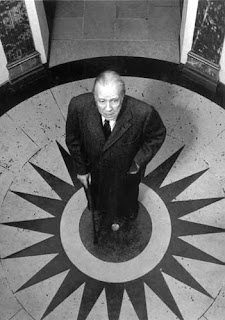 The Inner Life of Jorge Luis Borges (Color, 1972)
Jorge Luis Borges was a master of fantastic literature, and composed countless classic stories centering on lost civilizations and languages, and on ancient and invented worlds. This half-hour long documentary features several long conversations with Borges in his native Buenos Aires, addressing a range of topics from his love of libraries, living blind, and his literary concerns of fantasy, time, and space.

Baron Munchausen’s Dream (B&W, 1911)
Baron Munchausen’s Dream is a late-period film in the work of Georges Méliès, who created a distinct and innovative formal style in early cinema with films including A Voyage to the Moon. In this short film, Baron Munchausen enters a dream world when he falls asleep drunk, encountering both terrifying and enchanting otherworldly beings. Méliès visual style perfectly illustrates this fantastic tale.

Curator’s Biography
Hannah Airriess is a graduate of the University of Chicago in Film and East Asian Studies. She has previously programmed at Doc Films Theater in Chicago, and various art spaces in the Midwest. She has been programming with Oddball since March of last year. 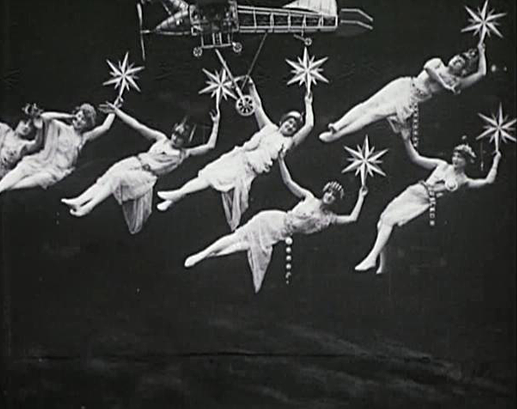