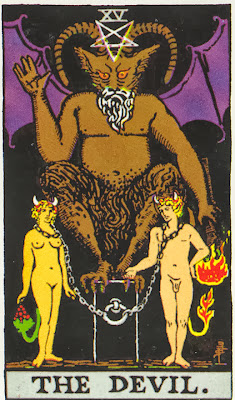 Oddball Films and curator Kat Shuchter bring you Satanic Sinema: The Devil Gets His Due, a program of vintage 16mm netherworld delights with saucy cartoons, lost TV episodes, experimental marvels, satanic smut and more!  Kenneth Anger teams up with Anton LeVay for the psychedelic satanic symphony Invocation of my Demon Brother (1969) with music by Mick Jagger.  Betty Boop faces off against the horned one in Hell, and brings down the temperature with her icy stare and her seductive dance in the Fleischer Brothers' Red Hot Mamma (1934). Sid Caesar stars as the lord of the underworld trying to lure Ronald Reagan's wife away in GE Theater's The Devil You Say (1961), based on a story by Rosemary's Baby author Ira Levin.  Canada's Nelvana studios brings us a classic tale of selling your soul for rock n' roll in the animated rodent rock opera The Devil and Daniel Mouse (1978). The rise of occultism in the late 60s and early 70s led to many "investigations" like the hippy-witchy Occult: X-Factor or Fraud (1973). Burlesque Queen Betty Dolan is half-devil, half-dancer and all delightful in the magnificently costumed mid-century Satan-Tease.  A young-witch must cast a spell on her beloved in the lovely poetic short Mantis (1971).  Plus! Original trailers for Satan's Cheerleaders and The Omen, sinful sweets for all and even more satanic surprises for one Devil of a night!


Invocation of My Demon Brother (Color, 1969)
In Invocation of My Demon Brother filmmaker Kenneth Anger creates an altered state of consciousness through the use of cinematic and psycho-spiritual magick techniques.
The film is described by notorious avant-garde filmmaker Kenneth Anger as “An assault on the sensorium” features “underworld powers gathering at a midnight mass to shadow forth Lord Lucifer in a gathering of spirits”. Invocation is a quintessential late 1960 freak-out, containing a montage of drug use, pagan rituals, an albino, stock footage of the Vietnam War, the Rolling Stones in concert and abstract imagery all played  back at various speeds. The film is accompanied by a repetitive, droning Moog musical score created by Mick Jagger. In the words of avant-garde film critic P. Adams Sitney “It is Anger's most metaphysical film: here he eschews literal connections, makes images jar against one another, and does not create a center of gravity through which the collage is to be interpreted... the burden of synthesis falls upon the viewer.” 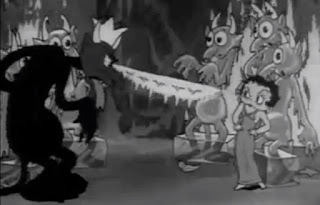 Betty Boop in Red Hot Mamma (B+W, 1934)
It was a cold and snowy night and Betty is freezing cold in her skimpy nighty, but when she blazes a fire in the fireplace, she finds herself in a cartoon inferno, face to face with the Devil himself, and you know no man is a match for Miss Boop! 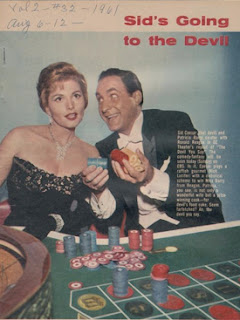 
G.E. Theater's nod to a deal with the devil, this rare episode features Sid Caesar as Satan trying to lure Ronald Reagan's wife away from him with promises of fur and jewels.  Based on a story by Rosemary's Baby author, Ira Levin.


The Occult: X-Factor or Fraud  (Color, 1973)
X-Factor or Fraud presents us with self-styled mystical types ranging from earnest believers to hucksters, served up with a generous sprinkling of cheese. It's hippie chic meets old-style hag-tastic, with the motley bunch weighing in all things otherworldly. This camp fest is graced by the grandeur of talk-show-hopping superstar sorceress, Sybil Leek. 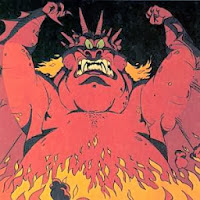 The Devil and Daniel Mouse (Color, 1978)
Canadian animation studio Nelvana brings us an animated rock musical about two struggling musician mice and the age old tale of selling your soul for rock n' roll!  With groovy songs and the hippest of mouse styling, this cartoon parable hits all the right notes.

Mantis (Color, 1971, 8 min.)
Follow a young witch as she lures a handsome wanderer to her woodland cottage and subdues him with love rituals. This really beautiful (and really rarely seen!) film straddles the line between narrative and poetic films. As short as it is, Mantis leaves you under its spell.
Email ThisBlogThis!Share to TwitterShare to FacebookShare to Pinterest
Newer Post Older Post Home